What Obamacare Does to Medicare

Another good cartoon on Legal Insurrection: 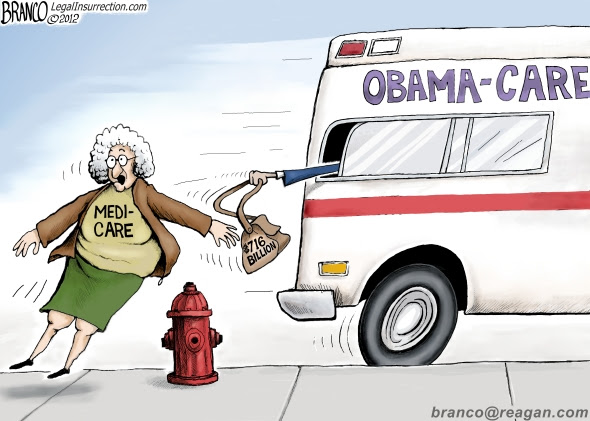 Posted by Left Coast Conservative at 4:03 PM No comments:

See the comments on the original cartoon posting here. 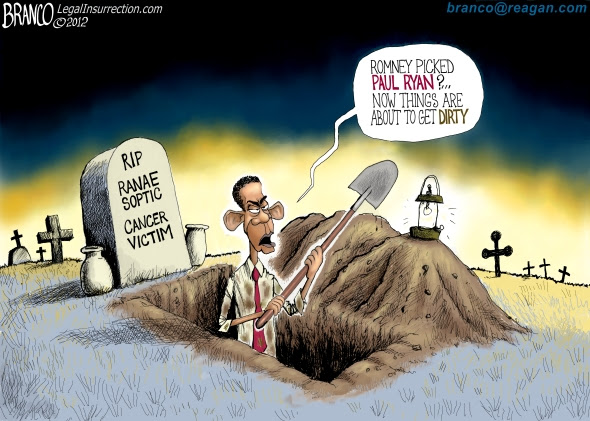 Posted by Left Coast Conservative at 10:56 AM No comments:

Reply to AN Anti-Gun Gun Owner

An editorial appeared in the Willits News calling for the renewal of the Federal AWB.  The author attempted to burnish her 2nd Amendment street cred by appearing in photograph with the shotgun. You can read the editorial and see the author here.

I posted the following in reply:

“I despise that damn shotgun, but I'm glad I have it.”

I'm glad you have it too, and despite your distaste for the shotgun, your statement seems to indicate that you acknowledge that firearms have social utility. Many of our fellow citizens would agree, including the 8 million people who are licensed to carry concealed weapons in the U.S. In fact, many people use guns for self defense every year. Here are 43 examples of citizens who successfully defended themselves outside their homes with legally carried handguns:

And lest you think these are rare events, this survey reports that defensive gun use is more common that reported in the news:

While you decry the availability of so-called “assault weapons”, and want to jump on the bandwagon to renew the Federal Assault Weapon ban, these rifles are also excellent self defense weapons, as this man found out recently:

Lastly, before going too far down the road of banning a class of firearms, we should perhaps take stock on the effectiveness of the previous AWB. This report

written for the National Criminal Justice Service draws the following conclusion about reinstating the AWB:

“Should it be renewed, the ban might reduce gunshot victimizations. This effect is likely to be small at best and possibly too small for reliable measurement. A 5% reduction in gunshot victimizations is perhaps a reasonable upper bound estimate of the ban’s potential impact (based on the only available estimate of gunshot victimizations resulting from attacks in which more than 10 shots were fired), but the actual impact is likely to be smaller and may not be fully realized for many years into the future, particularly if pre-ban LCMs continue to be imported into the U.S. from abroad. Just as the restrictions imposed by the ban are modest – they are essentially limits on weapon accessories like LCMs, flash hiders, threaded barrels, and the like – so too are the potential benefits.118 In time, the ban may be seen as an effective prevention measure that stopped further spread of weaponry considered to be particularly dangerous (in a manner similar to federal restrictions on fully automatic weapons). But that conclusion will be contingent on further research validating the dangers of AWs and LCMs.”

California already has an assault weapon ban, but that did not prevent Lovelle Mixon, a convicted criminal who should not have had any access to firearms, from getting a rifle and a pistol with which he killed four Oakland PD officers. Many mass shootings do not involve so-called “assault weapons” at all, but are perpetrated with handguns, as the Sikh Temple shooter, Virginia Tech shooter, and the Tuscon AZ shooter all demonstrated. Where are the calls to ban handguns? Oh, that's right, these guns are now constitutionally protected as a result of the 2008 Heller decision from the Supreme Court of The United States, so handgun bans are off the table. I suggest to you Ms Futcher that your so-called “assault weapons” are equally protected arms, and that the Supreme Court will rule that to be so within the next few years. The push to renew the Federal AWB are no more than a PR stunt, an attempt by certain politicians to be seen to be “doing something” about “gun crime” instead of a serious attempt to reduce the level of violence in society. You're misguided if you think the AWB effort is anything more than political Kabuki Theater.
Posted by Left Coast Conservative at 11:41 AM No comments:


Yesterday the Calguns.net forum issued a call to action for all Calgunners and California gun owners generally to resist efforts to pass SB 249 in the state legislature.

Why is this bill so important? Because it affects all owners of rifles equipped with bullet buttons, the device used to covert a CA illegal assault weapon into a CA legal semi-automatic rifle. The number of owners affected by this law number into the hundreds of thousands.

As stated in this press release by State Senator Leland Yee, the intent of SB 249 is to make the bullet button illegal:


Specifically, Yee’s bill will prohibit featured assault weapons with ammunition feeding devices that include but are not limited to magazines “that may be detached from the firearm by depressing a button on the firearm either with the finger or by use of a tool or bullet.” The bill will also direct the Attorney General’s office to develop new regulations regarding the definition of assault weapons.

The intent is clear: bullet buttons will be made illegal because Yee thinks that this is a loophole in the California Assault Weapon law, a position that the hypocritical Attorney General Kamala Harris now supports, despite her office going on the record in court filings deeming bullet button-eqquiped rifles to be legal:


“In recent years, the gun industry has developed a loophole that undermines California's assault weapons law,” said Harris. “I applaud the Legislature's interest in addressing this problem, and support efforts to pass legislation needed to restore the law's original intent. The Bureau of Firearms stands ready to prepare and implement regulations that will follow this clarifying legislation.”

To stop this bill we need all California gun owners to act. Using the information and guidelines in the above linked Calguns.net article, contact your representative today to voice your opposition to SB 249.

Posted by Left Coast Conservative at 9:58 AM No comments:

Request for Feedback on gun Control

The Mineola Patch published this article requesting readers to give their ideas about increased gun control laws. Here is what I contributed:

We do not need more gun control laws.  Most of the guns used in most of the attacks in recent years were bought legally and in compliance with all laws.  This indicates that the entire traditional approach of gun control is wrong, and more layers of the same types of laws will not help.

As has been the case so often recently, I am sure that someone will be found to say that the Sikh temple shooter was having mental health issues for some time, but that this knowledge slipped through the cracks of the system.  So why not try some outside-the-box thinking and approach this as a mental health issue?

Posted by Left Coast Conservative at 8:21 AM No comments:

Not In Favor of Gun Bans, Huh?

The pro-gun control side often claims that they are not after your guns, that they only want "common sense" gun laws.  But consider this statement made by Josh Sugarmann, made in this article:


"There is no valid reason for civilians to have assault rifles, semiautomatic handguns and high-capacity magazines," he said. "We have to start ratcheting down the firepower in civilian hands in the United States."

Sound to me like he wants not one but three bans in place: one of so-called assault weapons (Hey, Josh, "assault rifles", the fully automatic military weapons, are already banned), semi-automatic handguns, and high capacity magazines.  So, I guess Ruger Mini-14, revolvers, and standard capacity magazines (15-17 rounds) are okay then?  And when deranged people commit mass murder with these weapons, what will you ban then?
Posted by Left Coast Conservative at 8:16 AM No comments:

I so hope that this is true...


Today, in 2012, Barack Obama stands on his own — an unqualified man who did not have the gifts to grow into the presidency.

I have thought the same since 2009.  Elsewhere in the article he says that Democrats that he knows have finally come to the realization that the Emperor has no clothes.
Posted by Left Coast Conservative at 8:13 AM No comments:

Left Coast Conservative
San Jose, California, United States
I am an Electrical Engineering graduate that has worked as a software engineer in the telecommunications industry and as a test engineer in the mass storage industry. I have always has an interest in environmental issues, but am dismayed at the utter lack of scientific or technical knowledge expressed by many people involved in environmental causes. This blog is an attempt to address the deficiency.